ROG G703 is a beast of a gaming laptop that has the power to take on todays gaming desktops, thanks to its factory-overclocked 8th Generation Intel Core i7 processor and overclockable NVIDIA GeForce GTX 1080 graphics. G703 is the key that unlocks supreme levels of gaming, so you can play AAA games on Ultra graphics settings without compromises. Continually pushing the envelope, ROG has torn up the gaming laptop blueprint, becoming the first to integrate an ultra-responsive IPS-level 144Hz display with a 3ms response time into its laptops. G703 features HyperDrive Extreme storage, which uses exclusive technology to combine three NVMe PCI Express® (PCIe®) SSDs in RAID 0 configuration for read speeds of up to 8700MB/s, so games load up in a blink of an eye.

Simply saying that G703 has gaming desktop levels of performance* would be an understatement. It's powered by a factory-overclocked Intel Core i7-8750H that's capable of hitting an incredible 4.1GHz surpassing base speed by more than 10%! Similarly, its NVIDIA GeForce GTX 1080 GPU and 8GB of GDDR5X VRAM are factory-overclocked as well, and can reach speeds of up to 1974MHz and 10.3GHz respectively! This graphics prowess lets you enjoy the latest AAA titles at their maxed-out settings for immersive gaming experiences. The ROG-exclusive Gaming Center puts all this performance at your fingertips, with an intuitive dashboard that lets you push G703 to its limits with a mouse click. 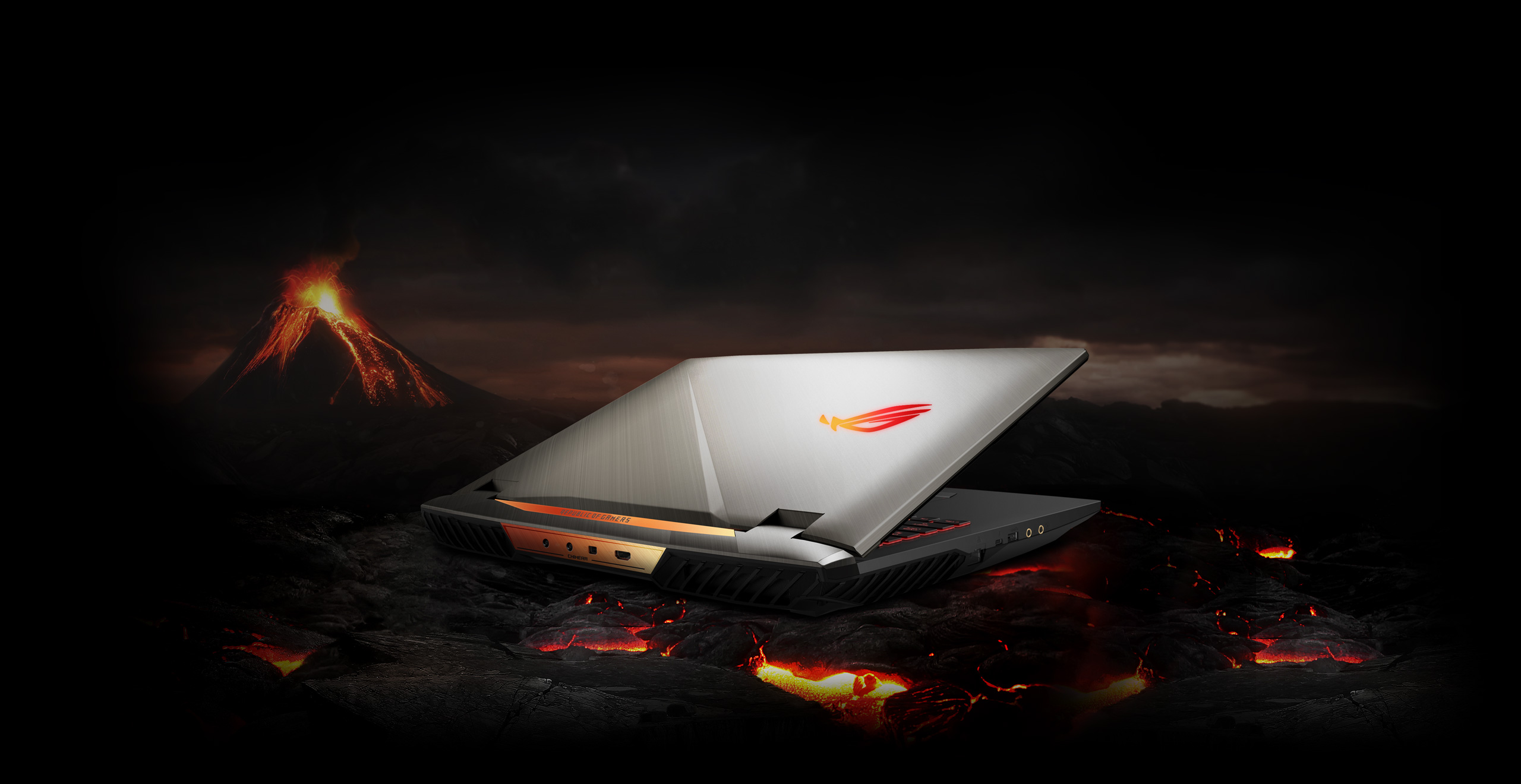 HyperDrive Extreme uses exclusive technology to combine up to three NVMe PCIe 3.0 x4 SSDs to provide G703 with the world's fastest RAID 0 storage available in a gaming laptop so your games load up faster. Having two out of the three SSDs directly connected to the CPU helps avoid DMI bottlenecks, allowing for speeds of up to 8700MB/s.

Actual performance may vary according to system configuration.

G703 features the most responsive IPS-level laptop display available. This Full HD panel features NVIDIA G-SYNC technology and a 144Hz refresh rate to provide you with smooth and seamless graphics never before seen on a laptop. Get ready to play the latest AAA games at maxed-out settings without lag, visual tearing, or stutter! In addition, an ultrafast 3ms gray-to-gray (GTG) response time reduces motion blur and ghosting, the display even features an anti-glare coating to get rid of those distracting reflections.

The patented Anti-Dust Cooling (ADC) system enables G703 to clean itself of harmful dust and particles. Acting like an immune system, dust, dirt and other particles are ejected from the chassis through two dedicated tunnels via centrifugal force, preventing build-up in the thermal fins to increase system stability and lifespan. Two high-performance, dual-outlet fans blow air through ultrathin fins, while the unique heat-pipe architecture cools the CPU, GPU and chipset power components independently. 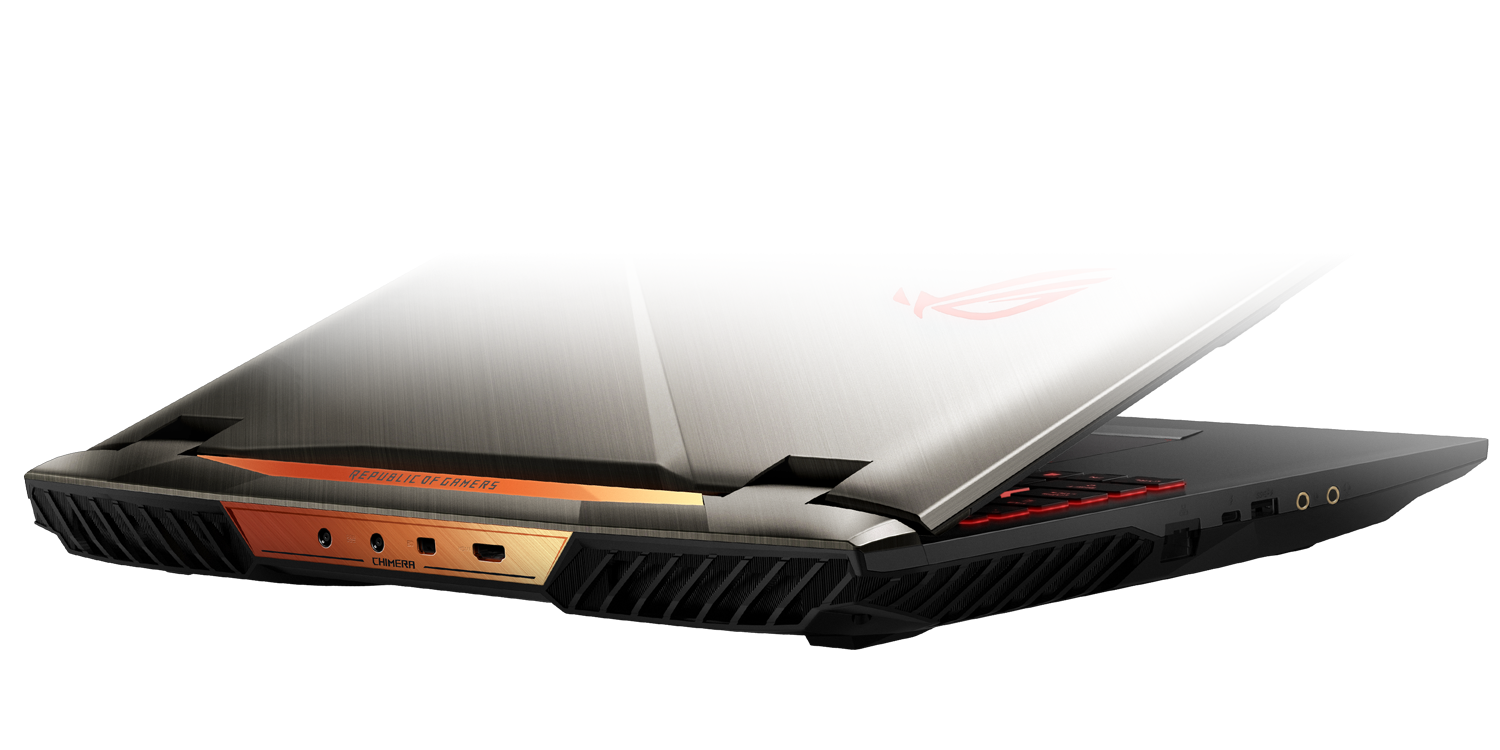 It's time to break boundaries between gaming platforms. G703 has exclusive Xbox features to offer a combination of unparalleled computing power and gaming console-like convenience. The integrated Xbox Wireless module lets you connect up to eight Xbox One controllers without the need for an external USB dongle, while the Xbox hotkey fires up the Xbox Game bar, so youre ready to record and broadcast gameplay, or hook up with friends on Xbox Live across Xbox One, Windows 10, tablet and smartphone. You can even play Xbox Play Anywhere digital titles on either Xbox One or Windows 10, at no additional cost. Your progress, including all save points, add-ons and achievements, goes with you. 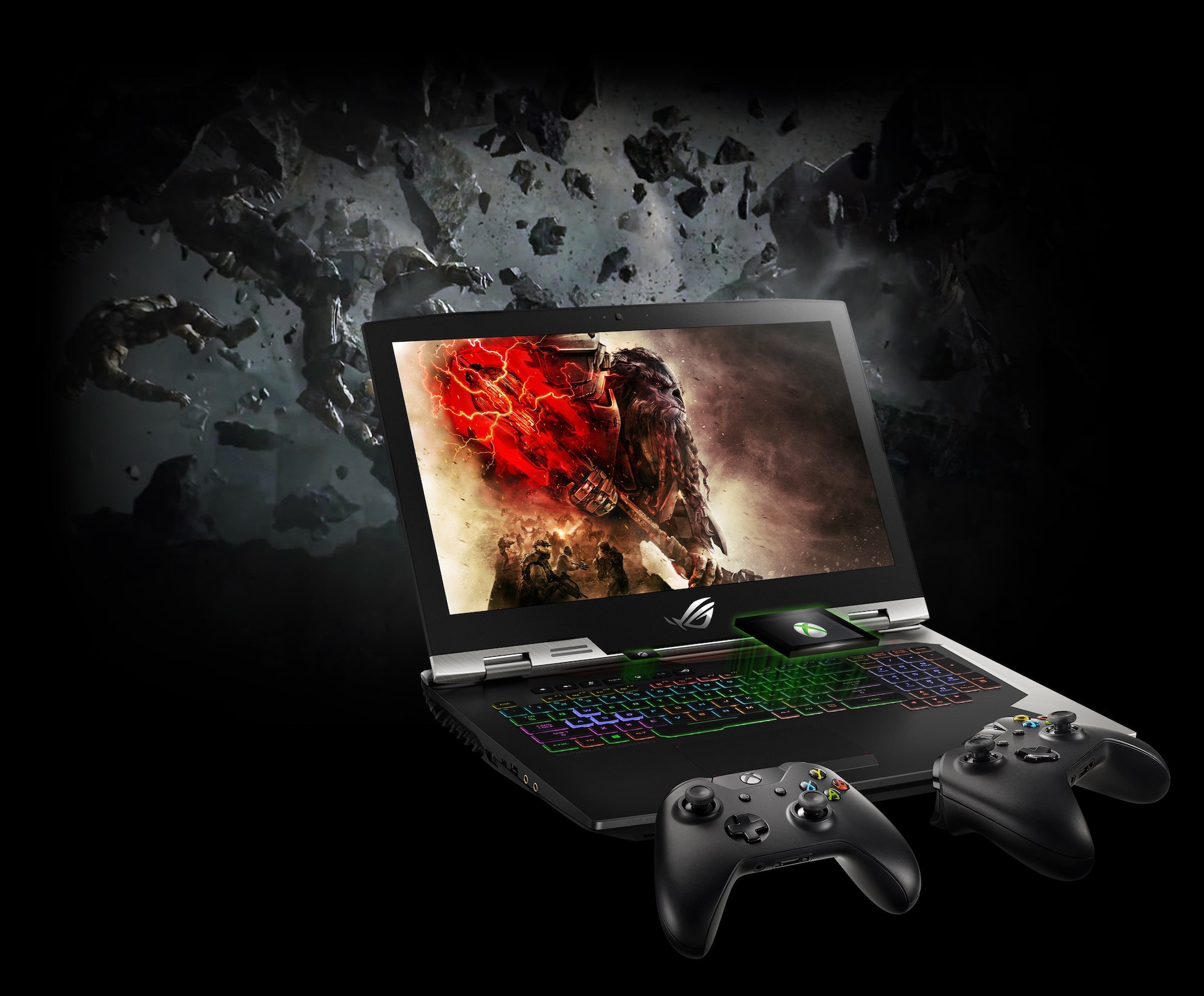 G703 delivers an unmatched sound experience. Two 2W tweeters located at the base of the display channel high-frequency audio waves directly towards you while two large, 4.5W woofers in the chassis reflect sound off of the table to deliver a perfectly balanced sound spectrum ranging from low to high frequencies. Further, smart amplifier technology protects the speakers while boosting in-game volume up to 200% with increased dynamic range and bass.

The Sonic Studio III audio suite simulates a 7.1-channel surround-sound signal for an immersive and accurate 3D audio experience, even on standard stereo headphones. In addition, Sonic Radar III uses audio cues to provide you with an onscreen overlay to pinpoint the enemys exact location even before you make contact. 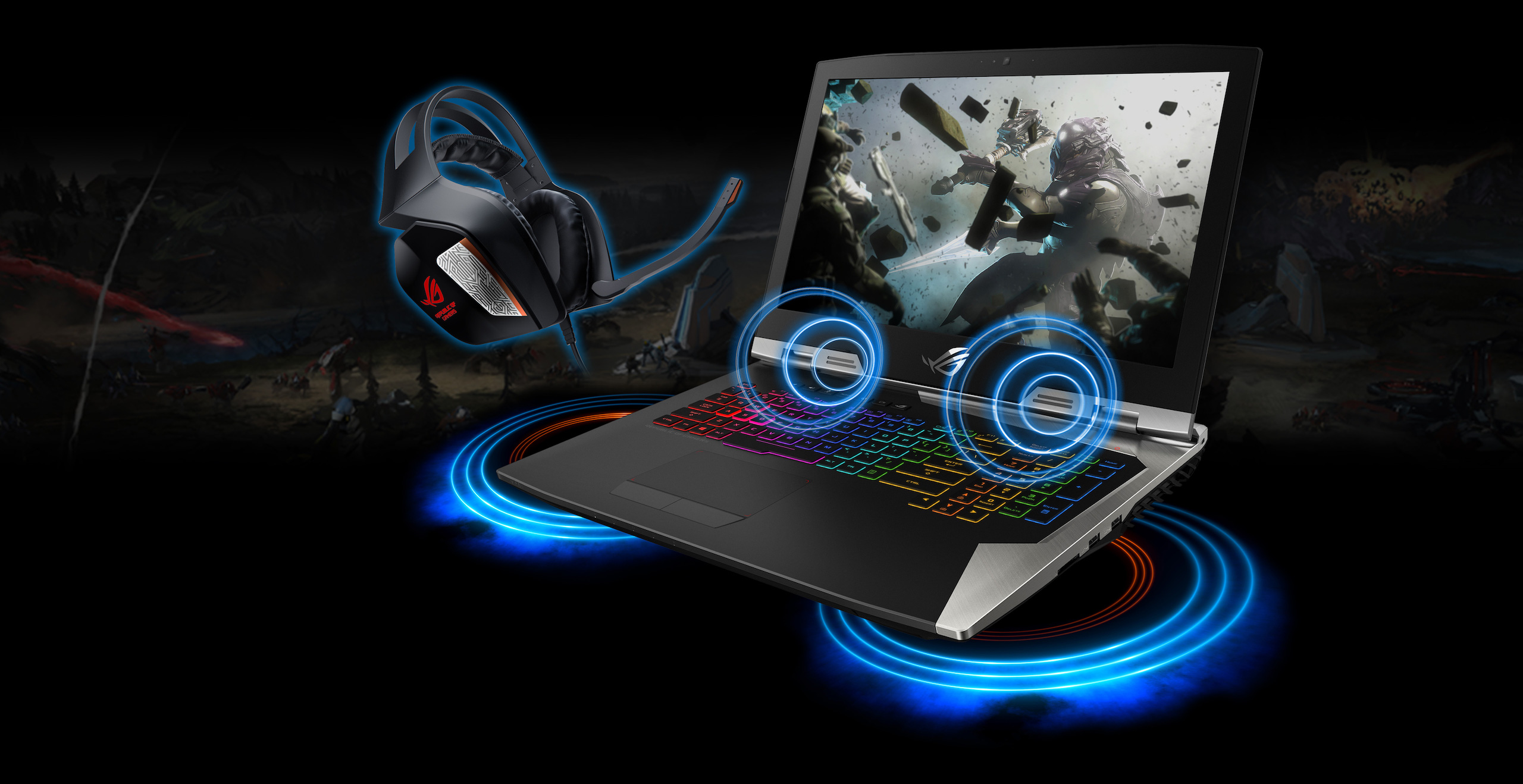 G703 comes with the latest and fastest display connections available Thunderbolt™ 3, Mini DisplayPort 1.4 and HDMI 2.0. The lightning-fast Thunderbolt 3 port with a Type-C™ connector delivers transfer rates of up to 40Gbps four times the bandwidth of USB 3.1! All ports support 4K UHD output at 60Hz, too, so you have the freedom to connect up to three external monitors simultaneously to play games, multitask or enjoy truly immersive cinematic experiences. 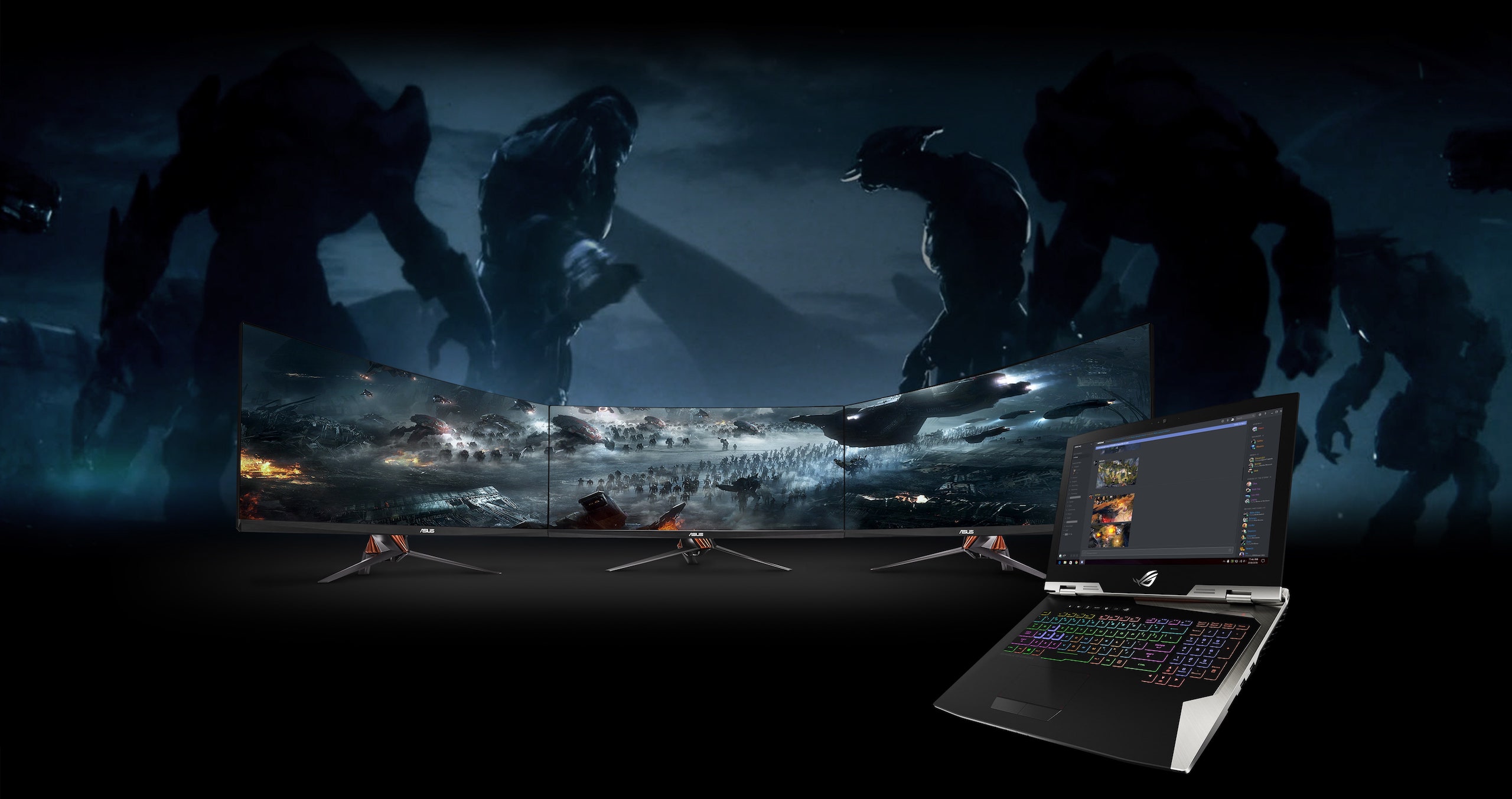 ROG Gaming Center is your hub to a multitude of exclusive apps to improve your gaming experience. This integrated control deck provides quick access to all the functions you need on a single dashboard monitor system information, configure individual game-launch profiles, adjust audio settings, allocate more bandwidth to your online games or overclock your system components. You can even remotely control Gaming Center with your smartphone or tablet.